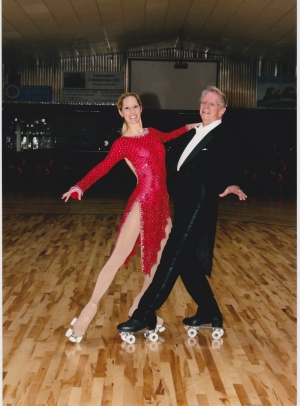 It was Valentine’s Day 2016 at the conclusion of the Port Richey, Florida, Presidents Day Invitational when Jack Greer and his coach, Melissa Quinn Cropley, took the floor for their warm-up.  It had been three years of training and cross training leading up to this moment with an audience of friends and coaches there to support him.  Seven international dances were about to be successfully skated in order to complete the most difficult and final RSA Team International Dance test.

Jack passed his American Team Gold Medal test in 1958 with his then Senior Dance partner, Linda Jo Baker. They also took the Bronze Medal in 1959 and went on to capture the U.S. Gold Medal in Senior Dance in 1960 and 1961 at the U.S. Championships.

After leaving the sport for more than 20 years, Jack fell in love with skating again after seeing the World Class Dance teams performing the international style dances.  He was partnered with Cecile Moran Raposa and took the U.S. Bronze Medal in 1991 in Masters Team Dance.  Eventually, the opportunity presented itself and Jack began testing in the International Dances with Coach, Melissa Quinn Cropley. In describing her, “You would have to skate with Melissa to realize the power it takes to become a world champion.  She made my dream possible as she is not only a great coach but also a wonderful human being who respects the efforts of older skaters.  Age was not to be a factor as we focused on the training and skills needed for the international style dances.  We treated the final test as an athletic event and as a team going all out, nothing held back and no excuses.”

“Thanks to Melissa who skated every step with me along the way, my dream came true.  I got to relive my youth of 1958 again in 2016.  I hope that if there is any message in this for older skaters, it is not to let anyone discourage you from your dreams at any age.  It’s not over yet.  Just surround yourself with positive people, always work hard and never give up.”

Jack is thankful to all that have gone on this journey with him going back to his father and first coach, Ernest Greer, Joe Baker in Atlanta, Cookie Crumbock, Pinellas Park, Karen Miller, Sarasota and especially Melissa Quinn Cropley, Port Richey, Florida.﻿

Jack: So happy for you..well deerved. Of all years not to be at the contest, it was this one. Sorry I miseed this great achievement. 😄😎fkpk
Posted By: BARBARA PEYTON

I skated competition in the 60's and miss it so mu.ch. congrats to YOU for seeing your dreams come true! Dances are a little different now.......but still a wonderful sport. God bless you!!!!!!
Posted By: Sandra Henry

So happy to see that you are finally receiving the recognition that you so richly deserve!
Posted By: Sherri Eppich

God Bless You Jack! I love your courage and your turns are amazing! xoxo
Posted By: Joan W.

It was amazing watching Jack skate with Melissa. It brought tears to my eyes watching his dream come thru.
Posted By: Ron Reams

Jack is an amazing skater, coach, friend. He was my coach back in the 60's and a fantastic one at that. I'm just so proud of this amazing man's journey from the 50's to the present. Congratulations Jack.
Posted By: Nancy summer

There was a roller rink I grew up in coos bay oregon 1960. How can I find info, picture etc
Posted By: Vickee c from so Il